Jalaram Bapa's birthday is celebrated on 7th day Shukla Paksha of the Hindu month of Kartika as Jalaram Jayanti. It falls on seventh day from Diwali. On this day, devotees are served meal as Prasad. There is a huge fair and festival at Virpur on the occasion and millions of devotees visit Virpur, on this day to pay their respect to the saint and have Prasad of chiefly of Khichdi with Bundi and popular Farsan item Ganthiya. The Jalaram Jayanti celebrations are also held at all Jalaram temples spread throughout India & abroad with festivities, where devotees participate to pay their respects and have Prasad. 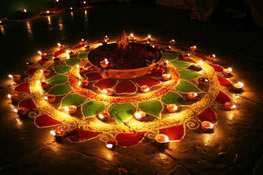 A festival most commonly referred to as, "Festival of Lights". Diwali is celebrated every year and is the biggest celebration in Hindu religion. The festival spiritually signifies the victory of light over darkness. It is particularly associated with Lakshmi, the goddess of prosperity, and marks the beginning of the fiscal year in India. 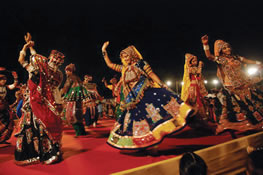 A festival dedicated to the workship of the Hindu deity, Durga. The word Navratri means "nine nights" in Sanskrit, "nava" meaning nine and "natri" meaning nights. The tenth day is commonly referred to as "Dussehra" (also spelt Dasera). 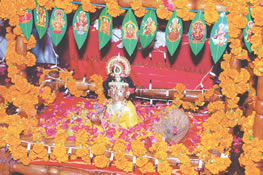 Lord Krishna was the eighth son of Devaki and Vasudeva. Based on scriptural details and astrological calculations, the date of Krishna's birth is known as Janmashtami. Hindus celebrate Janmashtami by fasting, worshipping Krishna and staying up until midnight, the time when Krishna is believed to have been born. 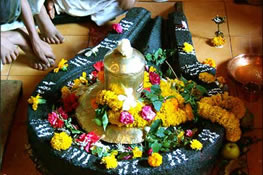 It is a festival celebrated annually in reverence of the god Shiva. It is the day Shiva was married to goddess Parvati. The Shiv- Ratri festival, also popularly known as 'Great Night of Shiva', marks the convergence of Shiva and Shakti 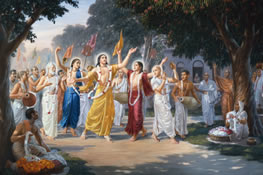 Chaitanya Mahaprabhu appeared as a devotee of Krishna in Mayapur, West Bengal, India in the late fifteenth century. He introduced sankirtan, widespread congregational chanting of the Supreme Person's names, as the most effective means by which anyone can achieve spiritual perfection. By His influence, many of India's leading religious scholars and their followers became devotees of Krishna themselves. 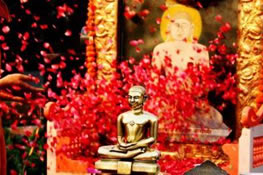 Also known as Mahavir Janma Kalyanak, is the most important religious festival for Jains. The celebration of this auspicious festival is Abhisheka (ceremonial bath) which is given to the local statues of Lord Mahavira. 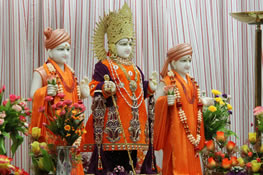 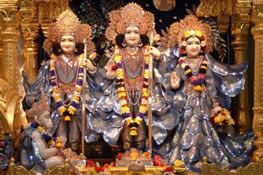 Rama navami is a Hindu festival, celebrating the birth of Lord Rama to King Dasharatha and Queen Kausalya in Ayodhya. Rama, the seventh avatar of Vishnu, is one of the oldest avatars of Lord Vishnu having a human form. The holy day falls in the Shukla Paksha on the Navami, the ninth day of the month of Chaitra in the Hindu calendar. Thus it is also known as Chaitra Masa Suklapaksha Navami, and marks the end of the nine-day Chaitra-Navaratri (Vasanta Navaratri) celebrations. Rama navami is one of the most important Hindu festivals. 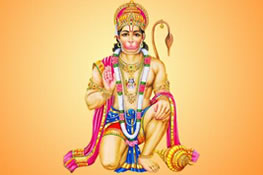 Hanumanh Jayanti or Hanumath Jayanti is celebrated to commemorate the birth of Hanuman, the Vanara god, widely venerated throughout India. The event is celebrated on the 15th day of the Shukla Paksha, during the month of Chaitra (the Chaitra Pournimaa). Hanuman Jayanti is an important festival of Hindus. Hanuman is the symbol of strength and energy. Hanuman is said to be able to assume any form at will, wield rocks, move mountains, dart through the air, seize the clouds and rival Garuda in swiftness of flight. He is worshipped as a deity with magical powers and the ability to conquer evil spirits. 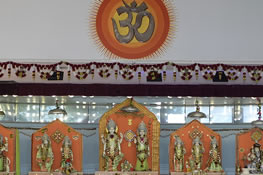